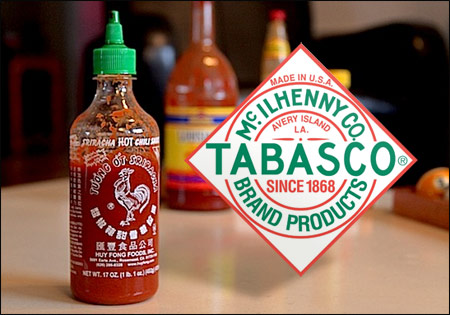 According to the New York Times, Huy Fong now sells more than 10 million bottles of Sriracha a year. The McIlhenny Company’s Tabasco Brand Pepper Sauce is the best selling hot sauce in America and the McIlhenny family wants to keep it that way. CEO Paul McIlhenny, before he recently passed away, was interviewed by Business Week about the growing popularity of sriracha sauce. McIlhenny confirmed they were working on their own recipe for a Tabasco Brand Sriracha:

“We’re just playing with it at the moment, but we’re definitely looking at the Asian category.”

Although the McIlhenny Company is over a hundred years older than Huy Fong, the two sauce makers have a few things in common.

Both companies are family run enterprises that follow the original recipes created by their founders. Both sauces are always made from the same breeds of peppers. Tabasco is made from a Capsicum frutescens pepper cultivated by Edmund McIlhenny on Avery Island in South Louisiana in the 1860s. Huy Fong Sriracha is made from a jalapeño hybrid supplied by Underwood Family Farms. Both companies also enjoy a cult-like following from people who enjoy spicy food.

It will be interesting to see if Tabasco brings its version of sriracha sauce to market, and especially to see if it will be anything like the rooster sauce famous for its complex flavor and iconic green cap.