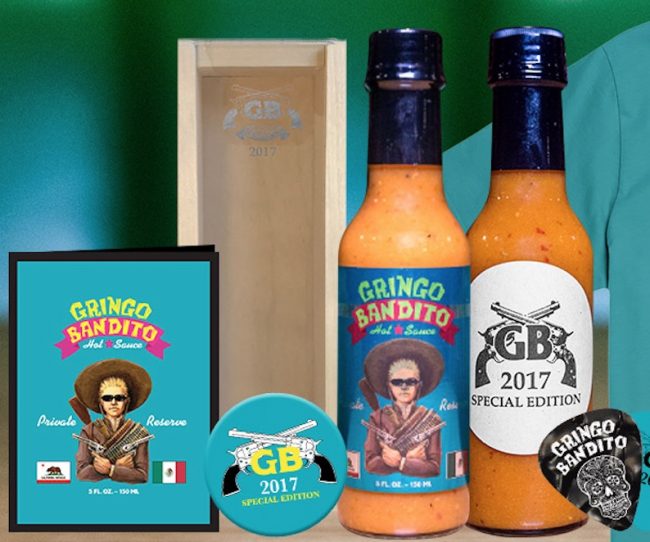 Gringo Bandito has released the 2017 edition of their wildly popular Private Reserve hot sauce. Produced in a single batch, the sauce is bottled with a new label design and now available in Super Duper, Just Super and Cheapskate packages. The Private Reserve is always a huge success for Gringo Bandito, with its limited production selling out quickly.

Each year, the Private Reserve recipe is put together as a unique offering for Gringo Bandito’s dedicated customers and hot sauce enthusiasts alike. The recipe for 2017 heats up with a blend of award-winning blue agave tequila, lime juice, yellow habaneros and red fresnos. The “Super Duper” package includes an autographed bottle of the hot sauce in a unique stand up wooden pine box, a custom t-shirt, guitar picks and more. One lucky winner who purchases the $75 Super Duper package will win a one of a kind signed giclee print of this year’s label art.

Available today, the private reserve can be purchased via Gringo Bandito’s website at www.GringoBandito.com

Cheapskate ($15): PR bottle in a paper bag with a red bow around the neck. Image: Picture of foil label and cheapskate bottle.