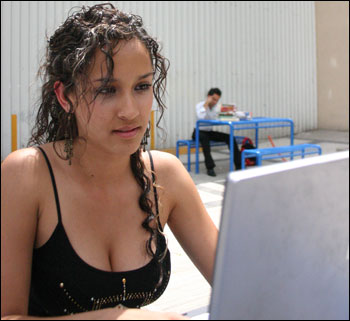 It’s time to revisit one of my favorite topics – other hot sauce blogs! Despite the advent of social networking streams like Facebook, Twitter and Google+, the now mature tool of blogging remains largely influential not to mention a still easy-to-access method of acquiring news and information about the movers and shakers in the fiery foods industry and the wonderful (and sometimes admittedly not-so-wonderful) products they create.

I’m a huge fan of spicy food blogs. I have an extensive array of RSS feed links dialed up in Google Reader which helps me to stay abreast of the daily talk and happenings in the Chilehead Nation. The vast variety and differences in focus make keeping up on the latest links from my blogging brethren fun.

When I last wrote about this topic ten months ago, I suspected that we were in the middle of a hot sauce blog renaissance, and I was correct in my guess. There existed more web blogs chronicling peoples’ peppery adventures and thoughts – both in terms of quantity and quality – in the time since HotSauceBlog.com set the standard for the medium in 2004-05. Virtually all are still online in some shape or form, with a couple of newer ones competing for your attention.

Which ones are still pushing out content on a regular or semi-regular basis? While all possess some intrinsic value of some form (especially in terms of their archival material), I’ll attempt to weed out the currently productive ones from the dormant ones…

Terrific work abounds from the husband and wife chilehead team of Brian and Marilyn Meagher on the Hot Sauce Daily blog. This blog is typically updated a few times a week. The Meaghers have a burning passion for grilling and smoking, so there’s a lot of emphasis on barbecuing in addition to traditional hot chile pepper matter. The Meaghers also host an informative audio podcast focusing on the heat at HotSauceWeekly.com.

This has become possibly the most frequently-updated chilehead blog in America. Al “Buddah” Goldenberg keeps cranking out the posts out virtually everyday, with the vast majority containing ILIS’ trademark videos. It’s not only high in quantity, but quality as well; from product reviews to event coverage, Buddah and his team keep the camera rolling on spicy infotainment. The conversations in the comments section are often enlightening as well.

James Beck has really pulled this thing around. After the confusing course that his Spicy RV project was taking last year, James and his partners in crime John Scrovak and David Martin have made his original site, Eat More Heat, one of the leading voices in the chilehead world. It certainly has gotten a major boast from the popular live web show they do every Tuesday evening. While the style of humor displayed in the video webcast often isn’t my cup of tea, the fun and irreverence has proved to be appealing to the multitude of folks who tune in every week.

Another popular spicy food blog. Headed by Doug Spiros, this fun online destination has a rotating stable of multiple reviewers and contributors expounding on the expected hot sauce and chile pepper discourse. There has also been some emphasis on the “More” part of the name as well, with coverage of other food enhancers, BBQ, beef jerkey, wine and beer. Peppers and More is usually updated several times per week, so be sure to bookmark this site or put its feed into your RSS reader to keep up with the latest.

Our friends across the pond in the UK are MONSTERS at getting fresh chile (or as they spell it, chilli) related content up on a daily basis. Hot sauce reviews, pepper chat and more are all part of this info-rich site that’s well worth visiting for North American chileheads.

The reason I lump these three together is because all of them are vehicles of the Pope of Peppers, Dave DeWitt. As expected, there’s oodles of recipes, industry viewpoints and various culinary talk at each one. The Mex Grocer site places it’s major aim on South of the Border cuisine and culture. The Fiery Foods website has been Dave’s main hub on the web for over a decade and he or one of his writers will periodically post new material to the site. Dave’s new BURN! Blog had its roots as a subscription-based e-magazine earlier this year but was quickly restructured into a free website with multiple contributors.

New Kids on the Blog

Derrick Wood is the “Hot Sauce Honcho” of this relatively brand-new blog. It’s often updated with new video material. This is a site to keep your sights on.

My fellow St. Louisan Ryan Graub has had his hands in numerous “flaming pies” (any of you get the Beatles’ reference? Eh, maybe not…) as a contributor for I Love It Spicy, Hot Sauce Addict and Peppers and More. RG’s Sauce Reviews is his own little corner of the web. Perhaps not as frequently updated as other sites, Ryan has informed me that new goodies will be posted here soon.

Mike from Madness has an outstanding blog, an offshoot of his main Chile Pepper Madness site, where he offers recipes, industry interviews and his own take on the wide world of chile peppers and spicy food.

On its home page, it may appear that Mike “The Hot Sauce Guru” Wilbur has converted his once-young blog into a selling tool for an e-book on the “Health Benefits of Spicy Foods”. It takes a click or two to find out that he’s still occasionally producing videos, most of which feature fiery product reviews.

New Jersey IT dude and hot sauce fanatic Ted Whittemore hasn’t updated Fresh Hot Sauce frequently in its nearly two-year history, yet it’s a site that still offers a sprinkling of meaty content. A pair of postings in June 2011 proves he’s still around.

Steve Walsh commands this great-looking blog which boasts many authors with informational content and the typical hot sauce analysis. It’s slowed down a bit as of late, but that by no means spells doom for this terrific site, and it’s definitely an online hot spot at which heat freaks can feed their addictions.

On Life Support or In Limbo

Joe and Linda Levinson certainly have had one of the oldest and prestigious spicy food blogs around. If any existing hot sauce sites could be given “grandfather” status, this would be it. Many are wondering where the primary post authors (the Levinsons, and Jonathan Passow) have been as of late. Myself and a few others are privy to what’s going on, and I won’t divulge the details (don’t worry; Joe and Linda are doing just fine). As of the time of this writing, the future is up in the air for THZO, although I predict another post or two before summer’s end.

Steve Smith got off to a strong start last year by making video clips for both his own 2Hot2Eat site and I Love It Spicy. We haven’t seen much of him and his laid-back, Texas-style perspective lately.

The heat-seeking duo of Scott and Dave concocted a smattering of fun videos for B.o.B. but have posted only two so far in 2011.

Russell in Iowa has not offered anything new in over one calendar year. It hurts to see this one go, but it might indeed be dead for good.

Another slick-looking site crammed full of hot recipes and reviews, yet it’s been stagnant lately, especially on the product reviews side. Will owner Matt Kay make a resurgence and explode once again?

Yep, if you haven’t been keeping up, owner-in-chief Nick Lindauer is bringing back the original Hot Sauce Blog. Well, that was the plan when I reported that back in March. I certainly understand that “life happens” and both personal and professional things can get in the way, so Nick need not apologize for any delays. Yet as it exists, the currently-dormant site remains largely useless as any propagator of new news and info. I’ll loosely keeping an eye on it in the coming months to see if there’s any progress made.

The State of Hot Sauce and Chile Blogs in 2011
Tagged on: blog