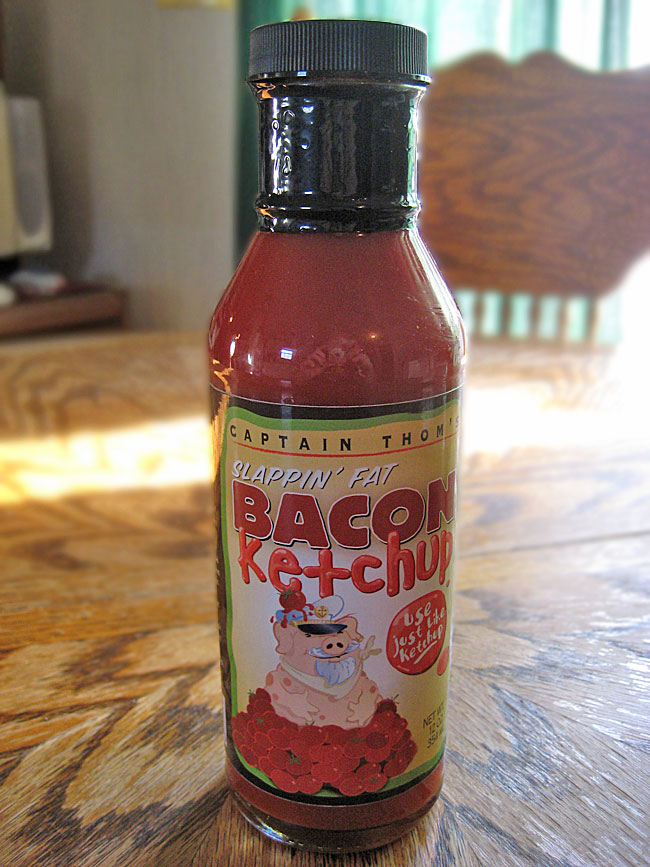 I’m putting my foot down: I will NOT partake in the current bacon craze/meme/fad. If you’re unfamiliar with what I’m talking about, it’s the trend where seemingly everyone is going bonkers over bacon-flavored and bacon-themed everything. Just move two inches on the internet and you’re sure to bump into some website touting something as ridiculous as bacon-flavored Kool-Aid, bacon-wrapped bacon on a stick, or bacon-scented cologne with throngs of commentors and forum members applauding along in approval like zombies. Sure, bacon has its place in the culinary world, but there are numerous other foods and tastes I’d select anyday over these cured strips of pork.

That having been said, I still wanted to give the new Captain Thom’s Slappin’ Fat Bacon Ketchup a shot. Captain Thom Edwards usually has a good handle on what makes sauces taste superb (his Thai Monkey sauce is one of my faves), so naturally I was intrigued with what he could pull off.

Aroma:
4 out of 5. Sweet, tangy tomatoes and a hint of bacon.

Appearance and Texture:
4.5 out of 5. If you love the consistency and look of good ol’ American tomato ketchup, then you’re in luck, because this is precisely what it’s like.

Taste Straight Up:
4.5 out of 5. There are no big surprises with the flavor – if you can envision the concept of “ketchup with a bacon flavoring added”, then you’ve nailed it correctly in your head.

Upon tasting a lick, there’s the familiar presence of smooth, rich, pasty, tomato-y goodness with the right touches of sweet, salty and tart. Dialed correctly in the mix is a nice flavor of bacon. It’s not a nasty, artificial, chemical-like flavor, but a real, natural-like aura of the pig meat (the condiment uses oil mixed with natural flavoring to accomplish this). There’s not too much of the bacon to where it dominates the taste, but just enough to play a powerful-enough supporting role.

Taste on Food:
4 out of 5. What to try this out on first? Burgers and fries seemed too obvious and too conventional, so what else was there that typically employs regular tomato ketchup that I could substitute this on? Ah, there’s meatloaf, which is always a dinnertime favorite around Casa Del Roberts. 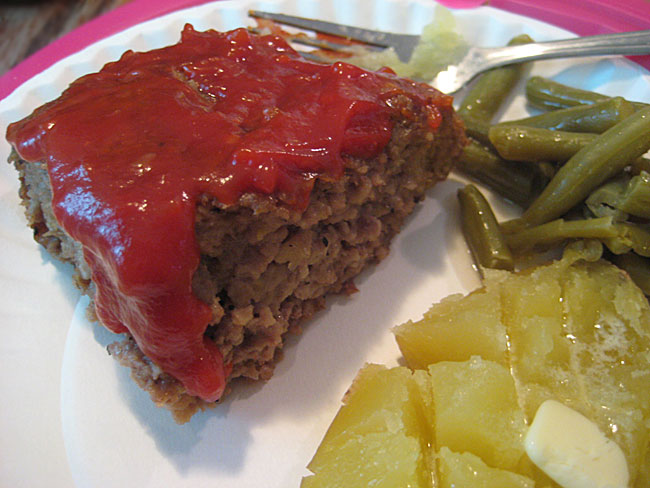 I cut off a Scott-sized hunk of meat loaf that was doused in Captain Thom’s Slappin’ Fat Bacon Ketchup. It was very smooth and enjoyable and paired well with the flavor of the hamburger, onion and spices contained within the loaf. You know the yummy crispy (and slightly greasy) edges and sides that develop on the meat loaf during the last few minutes of it cooking? Well, combine that with the Bacon Ketchup, and it nearly tastes like scrumptious, crunchy bacon, only with a beefy and tomato-like slant to it.

Suggested Uses:
The bottle’s label urges, “Use just like ketchup”, so what more could I add? I think that’s fitting advice.

Label:
5 out of 5. Very sharp and memorable, it shows the good captain, portraying a hog and sitting in a pile of tomatoes. Great graphics and concept.

Overall:
If you love ketchup or bacon, you would probably like this. I couldn’t imagine Captain Thom’s Slappin’ Fat Bacon Ketchup being a full-time replacement for the real deal. If you want a delightful alternative to ketchup that you can break out every once in a while, look into this.